I’m starting a cat band and knitting with an octopus.

Lobster, potato, bacon pizza. Oh my.
Areas where I was successful over the past few months:

Areas where I could have improved:

Areas I spent more than expected, but mindfully:

All in all, not too bad. Now that my car is paid off, I’ve upped my retirement contribution and I’ll start saving money while I have it to save, because my financial situation in the fall will be very different, unfortunately!

To be fair, a lot of my spending in March was due to a trip* to Washington, D.C. I took for work and which I’ll mostly be reimbursed for. Also it was tax refund time and while I never go wild when I get an unexpected windfall, I did loosen up the purse strings just a bit last month.

That said… Areas where I was successful:

And then there were areas I was less successful:

There were also some expected, but irregular, expenses, namely:

It wasn’t the greatest month, with regard to the budget, but it wasn’t terrible either! I’ve done some math and I’m hopeful that I will actually be able to meet my goal of paying off my car by the end of the summer. Fingers crossed and belts tightened!

*The trip was to the Digital POWRR Institute and it was amazing. The whole training was fantastic, the weather was perfect, the food was great, the Library of Congress was awe-inspiring, the museums were phenomenal…

So, now that it’s March, are you wondering how I did with my spending in January and February?

Probably not, but I’m going to tell you anyway.

It wasn’t until a little ways into January that I decided to be intentional about my spending this year, so there were a few purchases that slipped into the beginning of the month that I may not have made otherwise. (Some home stuff, a new [secondhand] dress, skincare products.)

Interestingly, my February spending on home improvement actually went up…by a fair amount. Oops! I bought some under cabinet organizers and a new toilet seat to replace our cracked one. My household bills were about the same – they really only change with the weather and it isn’t warm yet. I spent less on gas & tolls – entirely because of February vacation and not driving my kids to school every day that week. I spent slightly more on groceries and far more on eating out, which I also attribute almost entirely to February vacation. I spent much less on personal care (no new skincare products this month!) and clothing. I did end up buying a pair of leggings because I wear them religiously and my many pairs are starting to become hole-y. (See what I did there?)

It was also my birthday this month and I did choose to spend birthday money on fun* stuff instead of getting ahead financially. All work and no play, y’know… And thus, I now own proper bread proofing baskets, a fancy lame, and some lightweight lidded containers so I no longer have to lug around a heavy glass bowl. My bread today was fabulous, yes.

*I am now at an age where fun = bread baking supplies and storage systems. Yup.

December was a busy month. (Isn’t it always?) E was in the Nutcracker and we had time between shows to grab some dinner. I opted to take her out instead of thriftily packing food, like I usually do. I thought she deserved a treat. We walked around the festively lit-up town, E in her wildly silly-looking bun, and I let her choose where we ate. Happily, she picked a new-to-us-both place – Black Cow!

She chose the grilled cheese and tomato soup, which were both divine. I opted for a cheeseburger and a house made orange cream soda. (I love anything that tastes like an orange creamsicle, after hating that particular flavor combination for years.) The cheeseburger itself was really good – but I was ever so slightly disappointed that they don’t really have any fun flavor combos for burgers, just your standard cheese-pickle-lettuce-etc. I got super spoiled living in Texas where it’s All Meat, All the Time and fun flavor combos to boot. (Pickled jalapeños & Monterey jack on a jalapeño cheddar bun! A fave from back in the day.) Nevertheless, would return! Next time I’m getting fries…

But I did hit up the Farm Stand in South Portland with H one rainy day while E was at an appointment. It’s not a restaurant but we did get food…so… They have an impressive collection of booze – lots of it local – and tons of fresh produce, meat, and other assorted goodies. We got cookies & chocolate & drinks.

We also tried out the Kennebunk House of Pizza while at my parents’ timeshare in Kennebunk. It was typical house of pizza fare – we had pizza and some really delicious loaded cheese fries that I’d eat again in a heartbeat. (If my heart wouldn’t stop beating afterward…)

H went to a classmate’s birthday party at 33 Elmwood where I didn’t really eat much (mainly H’s leftover pizza crusts and some birthday cake) but I sure wish I could’ve had some cocktails. If you’re unfamiliar, 33 Elmwood is a bowling alley/restaurant/bar type place. It’s large and spacious and while I can’t say the drinks are good, they sure look good. I mean, I would drink just about all of these with great pleasure. Apple caramel moscow mule? Yes please.

I want all of these.

The pizza crusts I munched were tasty and the house made birthday cake was actually really good, though the frosting was far too sweet for my liking. This little dude really enjoyed bowling with his friends!

I’d love to go back when I have cocktail cash, I’m not with a bunch of first-graders, and it’s not 10AM.

Bonus: they have these great IKEA chairs!

They were so comfy I asked where they were from! 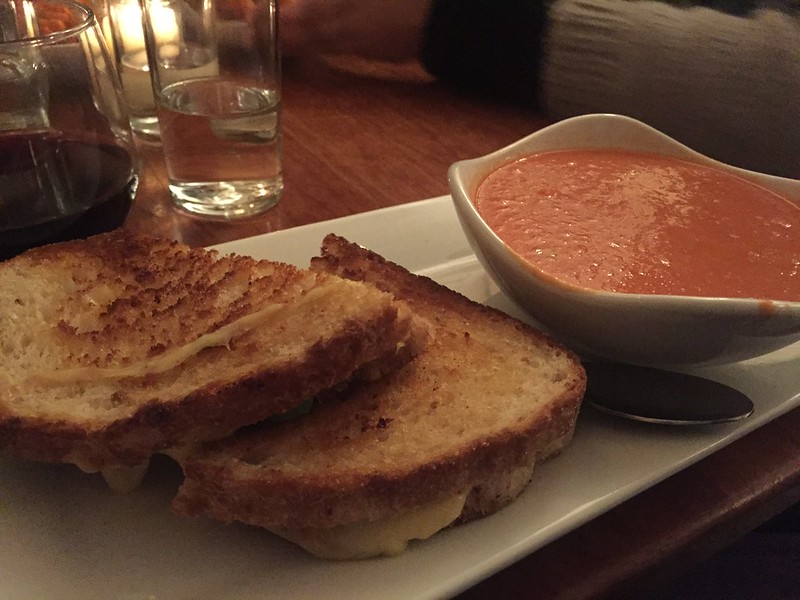 While on my nearly-yearly trip to New York for Rhinebeck, we ate at Shindig in Woodstock one evening. It was super cute, and tiny, and I had a grilled cheese and tomato soup that were amazing.

The whole weekend is always a great time. Friends, food, fiber. Last year was no exception.

And now for some photos! 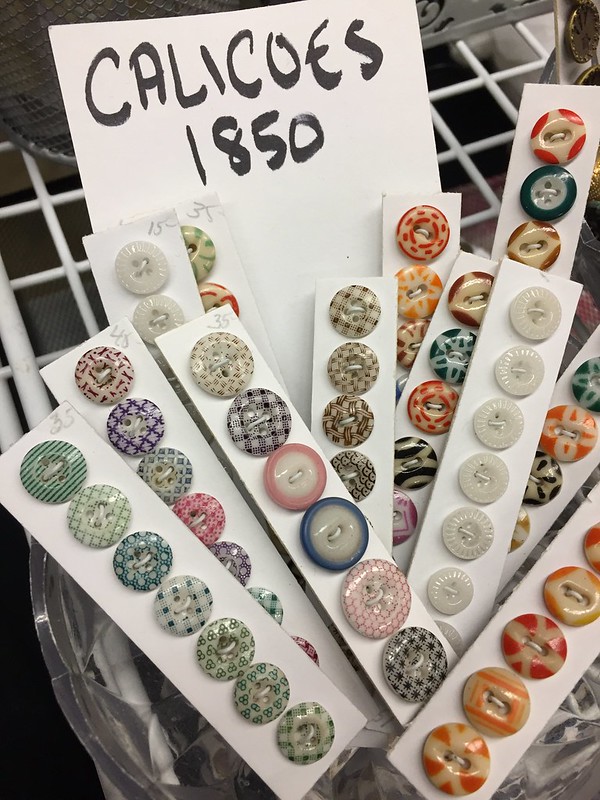 These button! My heart. 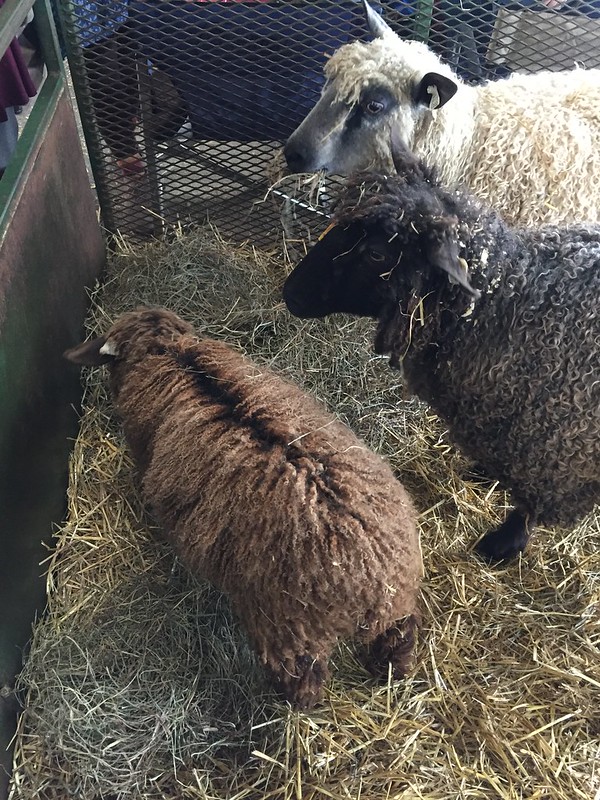 Sheep. What we’re all here for. 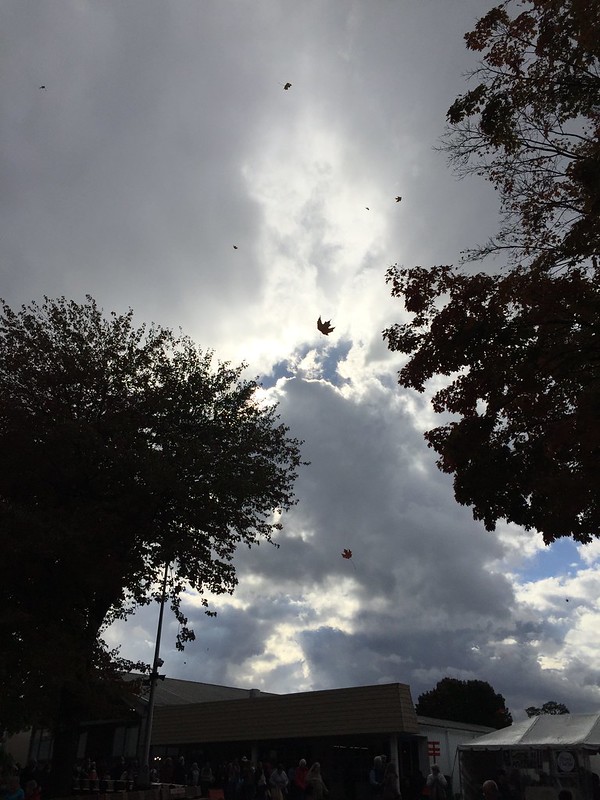 Falling leaves at the fairgrounds. 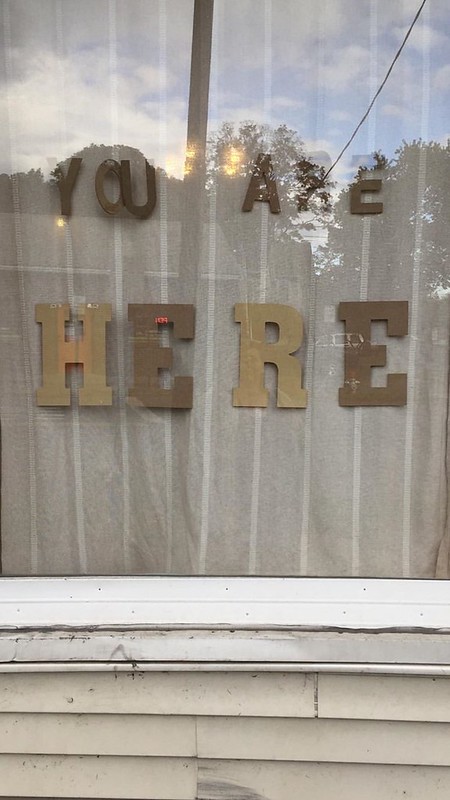 You are here. At Jill Draper’s, to be specific.

I’d been watching the construction of the Roots building with interest – I didn’t know what it was going to be until it was nearly done, but it’s right down the street from us, so I was hoping for something good. I can almost see if it from my house. (I could, if it wasn’t for all those other pesky buildings in the way.)

First of all, Roots is very…slick. The building is new, the furniture is rustically chic, there’s wood and metal and glass. They have a fancy website. (Which, I know, isn’t an indicator of anything really, but in this day and age so many places still have horrible-looking, uninformative websites.)

Second, Roots is church-backed, though you wouldn’t know it by the website. And you may not even notice when you go, if you’re not paying attention. As someone who went to a religious college as a non-religious person and ended up around a lot of aggressively religious people? I noticed. Like, a lot. There’s a small book shop area when you come in that carries religious reading material. And the people…well, they’re perfectly nice. Very nice. Like in a really “Hey, I’m being nice to you!” kind of way. Ugh, I feel horrible for complaining about people being too nice? I mean, seriously. Who does that? Bear with me. It’s my baggage. I just can’t with the overly-nice “Christian” attitude because I’ve known it to be so disingenuous at times. I’d rather have someone be less “nice” and more honest, if that makes sense. (I know, “not all Christians!” but this is my experience, so bugger off.)

Anyway! Religious qualms aside, I wanted to try the place soon after they opened, but at the time they closed mid-afternoon and weren’t open on Sundays. (They’re now open later, though still closed on Sundays.) So one Saturday morning in September, I dragged the kids up the street and we got some breakfast. The kids got a smoothie to share and some muffin tops. I didn’t try them but they disappeared quickly, so apparently they passed muster with the elementary aged crowd. I got an iced latte (as I do) which was good – pretty standard latte. And. And. They had biscuits! and! gravy! Which I love. Love. And you rarely see biscuits and gravy on the menu up here. (Know where I can get some? Please let me know!) I ordered them with great anticipation, but…they were only OK. Meh.

They did have really cute salt & pepper shakers all over tho…

I haven’t been back despite it being so close to home, because the atmosphere really threw me. I keep meaning to try it again but when Quill is only a little further away? I know where I’ll go.